New Delhi: Usha Sahu, 45, a Mitanin trainer from Bemetara district in central Chhattisgarh was in for a  shock when she checked her bank account in October. The bank had deducted Rs 2000 from the 4,000 rupees that she received as a special incentive for the Covid-19 duties for the months of April to September, 2021.

“When the other Mitanins in the block started complaining about the deduction, I checked my account balance. I found that they had deducted the same amount from my account too,” she said.

Mitanin, (female friend in the Chhattisgarhi language), as Accredited Social Health Activists (ASHA) of Chhattisgarh are known, are women community healthcare workers, who have been at the frontlines of the country’s response to the Covid-19 pandemic. The government of India announced a special Covid-19 incentive of Rs 1000 per month, or Rs 33 a day, between January to June 2020 under the Covid Emergency Response and Health Systems Preparedness Package. The period of incentives was later extended to September 2021.

In Chhattisgarh, the Mitanins that Behanbox spoke to, have either not received any payment or have received partially payments since January 2020. Worse, in districts where the Mitanins have received some money, the state has been recovering part of the payments made to them.

“ For those months of work, we should have received Rs 6,000 and not Rs. 4000. Forget paying the entire amount, they even took away the partial  incentive in two instalments of 2,000 rupees each,” Sahu told Behanbox.

ASHAs, a cadre of over one million women community healthcare workers across India have been responsible for contact tracing, carrying out door-to-door awareness campaigns, disease surveillance, data reporting, monitoring quarantine centers, facilitating access to treatment and Covid vaccinations, in addition to their routine tasks.

It has been two years since the Mitanins in most districts of Chhattisgarh have received full or any payment at all for their work to contain the Covid-19 pandemic.

Sulakshana Nandi, National Joint Convener of Jan Swasthya Abhiyan, underscores the tireless work of the Mitanins in Chhattisgarh, like all ASHAs in the country, through the pandemic.

“Even today they are identifying and motivating people who have not been vaccinated or need to get the second dose. Government of India orders stipulate that all ASHAs are to be paid Rs 1000 per month covid incentive since the start of the pandemic. But Chhattisgarh government has paid incentives for only three months (April, May and June 2020) and that too has not been uniformly paid to all ASHAs,” said Nandi.

Contrary to National Health Mission official’s claims of payments made, Mitanins told Behanbox that they have not received incentive payments for more than 2 months since the pandemic started.

“The government keeps issuing orders, but we do not receive a single penny in our accounts. We had received 2,000 rupees last year but that is it. In most districts, they have not paid a single penny this year. In the districts where payments have been made, the administration is taking back the paid amount,” said Asha Vaishnav, state president of the Chhattisgarh Mitanin Jagruk Nagrik Manch.

On November 10th, 400 Mitanins went on a strike in Manendragarh in Koriya district, demanding the payment of incentives.

Just got to know from a Mitanin #ASHA in @BemetaraDist that #Chhattisgarh govt is TAKING BACK #Covid19 incentive they were given this year. This is shameful! What is your explanation @HealthCgGov @ChhattisgarhCMO @MoHFW_INDIA?

“Despite having worked through the pandemic, I have not received a single payment of the monthly covid incentive promised by the government,” said Punita (34) from the Narharpur block in Kanker.

“We put in backbreaking hours of work during the lockdown. We were available even in the middle of the night to monitor and manage the arrival of migrant workers. Do we not deserve to be paid?” she asked.

“When we spoke to the authorities including the Chief Medical and Health Officer (CMHO) about the non-payment, they told us that the money hasn’t come from Raipur,” said Suman Thakur, a Mitanin trainer based in Kawardha district.

According to a media report in Patrika, a local newspaper, Mitanins were promised Rs 200 as an incentive for mobilising and accompanying people to vaccination centres, which remains unpaid too.

#Chhattisgarh govt must stop taking Mitanins for granted. Most Mitanins #ASHAs belong to poorer families and Adivasi & Dalit communities. Compelling them to work without fair wages is criminal. @akhbaarwaali had written about their struggle for decent work https://t.co/Wcbsu2SqS5

Incentive money paid to the Mitanins are now being recovered in certain districts of Chhattisgarh.

“What is most concerning is that blocks like Narharpur (Kanker district), Pandariya (Kabirdham district), Bemetara, Manendragarh (Koriya district) are taking back even the Covid-19 amount from the Mitanins,” said Nandi.

The Government had deposited  6,000 rupees as covid incentive for April to September 2021 into the Mitanins’ accounts in Kanker and Rs 4,000 into the accounts of Mitanin trainers in Narharpur (also in Kanker district) said Ganeshiya Shorey, the block coordinator of Narharpur in Kanker district in southern Chhattisgarh.

“The given incentives have been taken back from both, which is a gross violation of the rights,” said Shorey.

For Mitanins who had already withdrawn money from their accounts after the payment of the incentives, the state government is deducting the money from their regular monthly honorariums, reported Nayi Dunia, a local newspaper.

In an order issued on 8 November 2021, the Block Medical Officer (BMO) of Pandariya was directed to recover 5,61,000 rupees paid as Covid incentives to 561 Mitanins in the block within one day.

The BMO, in an order stated that  Rs 5,50,000  had been recovered from the accounts of 550 Mitanins in the block. Another order issued on the same day directed the remaining 11 Mitanins to deposit 1,000 rupees each into the bank account of the Block Health Society NRHM of Flexi Pool Pandariya. 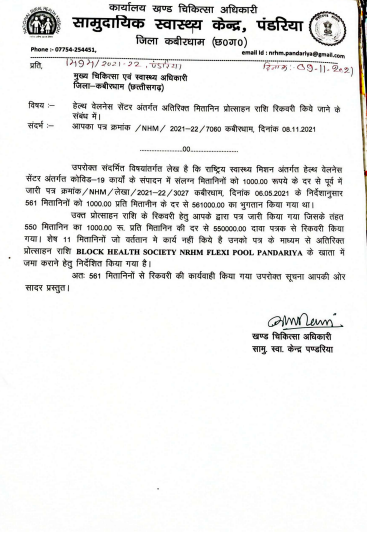 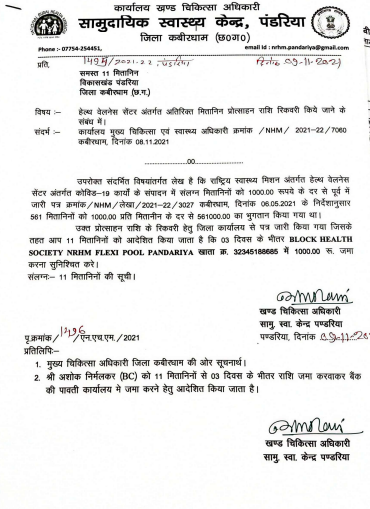 Following a social media outrage, TS Singh Deo, the incumbent Health Minister of Chhattisgarh, tweeted that he had directed the concerned officers to revoke the order.

“The fundamental question that the government needs to answer is how can any money be taken back from the bank accounts without the consent of the account holders?”, asks Chandrakant, an activist who works with Astha Samiti Sangathan, a non-governmental organisation (NGO) that works towards empowering the rural population based in Kabirdham.

“This is a questionable display of ethics by the state administration. The privacy of the account holder has been compromised in this process of recovering the paid incentives,” he added.

Nandi calls the non-payment of the incentives ‘humiliating and demotivating’ for the Mitanins.

“If the state government is really serious about health and women’s rights it must remunerate the Mitanins properly, even if it is from its own funds”, said Nandi.

“The ruling party had promised Rs. 5000 per month in addition to other incentives in their election manifesto. The fact that the state continues to disregard the obligation to pay Mitanins, who mostly come from poorer families and Adivasi and Dalit communities, adequately for the work they do shows the Chhattisgarh government in a very poor light,” she said.

Behanbox called the State Programme Manager for a response and has mailed a set of questions to the Deputy Director of National Health Mission of Chhattisgarh. This story will be updated when we receive a reply.

Complaints of non-payment of Covid bonuses and regular honorariums are not new and have been made by ASHAs across the country. According to a 16-state survey conducted by Behanbox in 2020, not only had 75% states not paid the Covid incentive at the time of the survey in July 2020, their regular honorariums had been delayed, in some cases for up to five months, in most states.

In a 10-state survey conducted by Behanbox between October and December 2020, it was found that ASHA workers had clocked over 12 hours of work on most days during the pandemic without the provision of adequate protective gear and state support. Despite working overtime, at least 86% of them reported an income drop owing to the suspension of routine tasks such as immunization, pre and antenatal care during the pandemic months.

Mitanins in Chhattisgarh do not receive a fixed salary. They receive task-based incentives for tasks such as immunisation, institutional deliveries, and antenatal care.

Suman Thakur said  that due to chronic delays in payments, most Mitanins have  forgotten how much they are owed by the government.

Due to lack of a fixed salary and the nature of the payment of these task-based incentives, most Mitanins find it difficult to keep a track of the payments, Vaishnav told Behanbox.

“We are the foundation of the state’s healthcare department. We went out during the lockdown without caring for our lives, to distribute medicines and monitor people’s health. We are on our toes round the clock. What do we get? Nothing!,” she said.

“If they do not pay us, why should we  work?”, asks Vaishnav.