Even if the garment industry is allowed to function in full capacity in the next few weeks, the situation will be precarious for the 4 lakh women workers employed across the state in the coming months, as the experience of the post-lockdown scenario in 2020 shows.

In the months after the nation-wide lockdown was lifted in May 2020, labour rights of thousands of women garment workers in Karnataka were violated with impunity by factory managements. This happened even as the state’s labour department and transnational apparel companies sourcing from these factories ignored these illegal practices.

What happened in Bengaluru’s garment factories?

Bengaluru Urban district, a prominent hub for readymade apparel in India, is host to over 750 garment factories. Together, they employ 2.8 lakh workers, 72 percent of whom are women.

Any disruption to the work,  almost always disproportionately affects the women workers who are overworked, under-paid and are situated on the powerless end of the global supply chain.

The economic crisis generated by the pandemic and the nation-wide lockdown exacerbated the precarity of the workers from June 2020, factory managements began downsizing and even closing operations entirely, citing losses due to a fall in orders from transnational apparel companies. Thousands of women garment workers in Bengaluru were suddenly left unemployed.

Factory managements were well within the ambit of their constitutional right under Article 19(1)(g) to reduce their workforce or close down their units. However, various judgements from Indian courts give workers the right to challenge closures and retrenchment and for state governments to scrutinise such moves. Moreover, workers are entitled to closure or retrenchment compensation, according to the Industrial Disputes Act, 1947.

Forced resignations have been an unfair labour practice in garment factories for a long time. When workers are forced to resign, factories can bypass the legal requirement to pay compensation or seek permission for retrenchment and closure. A recent study tilted  ‘Forced Resignations, Stealthy Closures: A Study of the losses faced by garment workers during the COVID-19 pandemic’ by the Garment and Textile Workers’ Union (GATWU) and the Alternative Law Forum found that 69% of the women workers across 25 factories in Bengaluru were forced to resign.

Many women workers reported that they were presented with two options when their factory announced the closure–to resign and claim their dues or to stay and delay/lose out on their dues. This fear pushed a majority of workers to resign without challenge.

Workers were asked to resign immediately or at very short notice, which did not allow them any discussion amongst themselves and with family members or even finding other means of alternate employment.

Factory managements also created a multitude of scenarios to compel workers to resign. These range from discontinuing transport services which are crucial for women workers to reach the factories to simply asking them to stop coming to work. In some instances, factory managements told the workers that there would not be a human resources department to process their dues, if they resigned after the factory closure.

These strategies of forcing workers to resign are not new and have been deployed even before the pandemic. However, the scale of forced resignation expanded during the pandemic. Coming soon after the nation-wide lockdown which left working class households with no income and savings and mounting debt, forced resignations multiplied the precarity of garment women workers.

Why are forced resignations illegal?

Forced resignations have been pronounced as illegal and an unfair labour practice by various judgements by Indian courts.

A legal resignation is one where the worker resigns without external pressures. Resignations tendered due to harassment or frustration resulting from harassment, are illegal because they constitute threat or coercion and not a voluntary act by the worker. In Shiram Swami Shikshan Sanstha vs Education Officer, Zilla, 1983, the court stated:

The court considered forced resignation as retrenchment which entitles the worker to both challenge the move and/or receive compensation as mandated under law. A retrenched worker is entitled to receive 15 days’ wages for every year of continuous service as compensation under the Industrial Disputes Act. Workers are also entitled to a notice period of one month (if workforce is 100 or less) or three months (if workforce is more than 100) or wages in lieu of the notice period.

Courts have upheld the necessity of compensation by pointing out that sudden unemployment as a result of closure and retrenchment takes place for no fault of the workers and is essential for workers to tide over the difficulties imposed by unemployment. In M/S. Hatisingh Mfg. Co. Ltd. And Another vs Union Of India And Others, the court held that:

The landmark Supreme Court judgement in the National Textile Workers’ Union and Ors. V. P.R. Ramakrishnan and Ors. (1982) demonstrated that contesting retrenchment and closure flows from the principles of natural justice.

Justice Bhagwati, citing Article 43 of the Constitution, stated that since the company was a product of the workers’ labour and capital, the workers have a right to be heard

Our study estimates about 17000 to 19000 workers across the  25 factories we surveyed were left unemployed during the pandemic. This has affected the financial and nutritional security of women workers’ households.

Most workers cut down their expenditure on food– mainly meat, vegetables, fruits, snacks, tea and coffee. Many just ate just two times and even once a day. 87% of workers reported to have  relied on the government subsidised food grains from the public distribution system–mainly rice and a kilogram or two of pulses.

In the second phase of the study conducted between January and February 2021, 84 percent of the workers we resurveyed had found employment, mostly in the garment factories. While this indicates a recovery of the sector, the losses that the workers suffered are numerous with long term consequences.

Forced resignations have meant that workers have lost out on continuity of tenure which robs women of benefits such as  gratuity and provident fund which they are entitled to after five and ten years of continuous employment, respectively. Besides, workers need to have a minimum amount in the corpus at all times to avail of pension from their Provident Fund. Forced resignations and the pandemic have hit the working class families hard due to which they have had to empty their corpus funds to tide over.

Women workers above 55 years, that we spoke to, had not been able to find new regular employment because of their age. Forced resignations have put such women permanently out of the workforce or forced them to resort to working at piece rates, where they are paid for every piece they produce. The absence of social security benefits such as Provident Fund, Employees’ State Insurance and gratuity make their situation even more precarious.

In the years of work undertaken by GATWU in the garment industry in Karnataka, we have seen forced resignations being commonly deployed as a strategy by factory managements to evade legitimate compensation. Stealthy closures, where workers are not informed or permission sought from the labour department, are also a common practice. Such actions have ensured that workers remain perpetually insecure, not knowing when they might be out of a job.

The garment industry in Karnataka currently employs a second generation of workers, the first having retired or resigned out of the workforce. GATWU has observed that the fear and anxiety over job security have extended into this generation too, demonstrating a continuity in unfair labour practices.

Indian courts and law-makers have introduced various legal provisions to limit vindictive or threatening behaviour by employers, by subjecting closures and retrenchment for examination for malafide intent. Why, then, does the state not examine mass resignations in factories, especially if it takes place during an economic crisis generated by the pandemic? Can they still hold onto the fiction that workers voluntarily resigned even when there were no jobs out there? 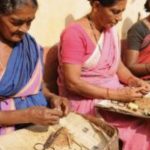 “I have been rolling beedis since I was fifteen. Our whole community is dependent on… 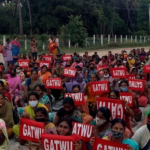 For over a month now, over 600 women garment workers have been sitting in protest…