Policy decisions for forest diversion during the COVID19 lockdown  which potentially dilute the Forest Rights Act, 2006 (FRA) and undermine the decision-making authority of the Gram Sabhas have become a major issue faced by Adivasi and forest dwelling communities.

FRA requires the completion of the recognition and vesting of forest rights and obtaining free prior informed consent of Gram Sabhas before diversion of forest lands. This is  specified in the Ministry of Environment, Forests and Climate Change (MoEFCC)’s own 2009 guidelines ,  the Forest Conservation Rules (2016), and also upheld by the Supreme Court in the landmark Niyamgiri judgement (2013).

During the lockdown period between March 24th and June 30th,  commercial coal-mining auctions  were  launched despite the fact that the Mineral Laws (Amendment) Act (2020) lapsed on 14 May 2020. Meanwhile, mining continued throughout the lockdown period as “essential” despite resistance from community voices over forest rights violations for years.

In a 2 part series,  we feature voices of forest communities about their forest rights in the face of numerous diversions for hydropower and coal projects. In part 1 of the series, we looked at forest diversions due to hydro-electric projects.

In part 2, we look at the diversions and violations in coal mining projects.

In mid-March, when the world was reeling under the novel coronavirus pandemic, Parliament quietly carried out several vital amendments to mining laws in India. With equal stealth and alacrity, these laws have been rapidly implemented while the entire nation has been in a lockdown.

First, an amendment was made to Section 8A of the Mines and Minerals (Regulation and Development) Act, 1956, so that a successful bidder for an existing mining lease which is expiring, is “deemed to have acquired all valid rights, approvals, clearances, licenses and like vested with the previous lessee for a period of two years”. Under this ‘deemed approval’, such successful bidder can continue mining operations like the previous lessee as if he has got all such clearances. Such deeming clauses are known as “legal fiction” in legalese.

On 31 March 2020, a circular was issued by the MoEFCC supporting this amendment, stating that such a new lessee of a mining lease will be “deemed” to have obtained forest clearance under the Forest Conservation Act, 1980, for a period of two years. The only ‘condition’ that the MoEF&CC included was that such a new lessee must pay the Net Present Value to the CAMPA fund. It did not, however, make such continued mining conditional upon the mandatory Gram Sabha consent for forest diversion under the Forest Rights Act 2006.

The second amendment has been made to the Coal Mines (Special Provisions) Act, 2015, whereby coal mining operations, until now open only to government companies, can be undertaken by private companies. This includes prospecting, reconnaissance, as well as mining operations for “own consumption, sale or any other purpose as determined by the Central government” of coal mines.

On 18 June 2020, the Prime Minister  opened the auction process for 41 coal blocks located across 5 states in Central India. Many of these mines are located in Adivasi areas which have been granted constitutional protections under the Fifth Schedule of the Constitution.

These lands and the resources they hold are also protected under the Panchayats (Extension to Scheduled Areas) Act, 1996, and numerous protective legislations which prevent alienation of tribal lands to non-tribals, which are themselves protected under the Ninth Schedule to the Constitution.

Testimony of a Community Organiser from Raigarh District, Chattisgarh 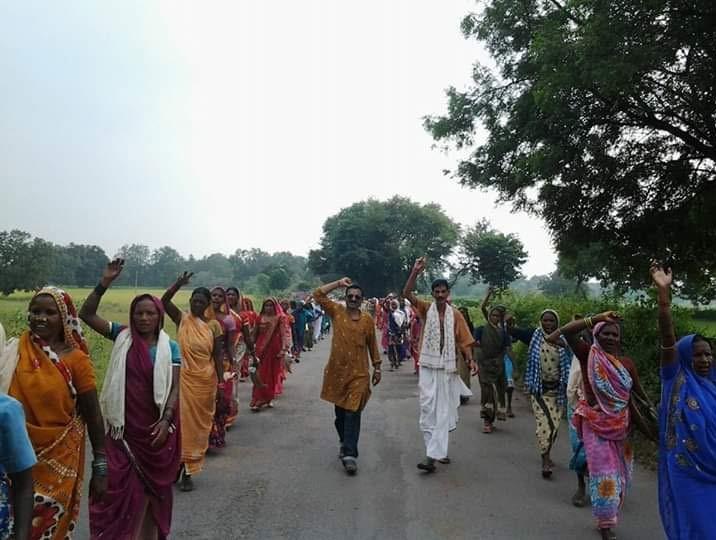 The legal recognition of community forest rights in mining areas of Tamnar, Gharghoda and DharamJaigarh, the three blocks of Raigarh district where coal mining auctions have been announced has been very difficult.

Since 2012, the government offices are refusing to respond to any forest rights claims.  They say it is a mining area and therefore different. Although the Chief Minister recently directed for the recognition of forest rights, the officials are willing to recognise only small parts of our claims.

There is the Kelo river flowing through three big mountains, which are sacred sites for Adivasi communities in this area. Government officials are only willing to grant us small parts of these mountains as sacred sites under FRA. We demand the legal recognition of our rights to the entire mountain range.

This district is a 5th schedule district and therefore as per PESA (1996) as well, we have rejected several of the coal mines.

Earlier, when Maharashtra Electricals organised a public hearing, we voiced our opposition loud and clear. Now, the new coal block allocations would go to Gujarat Electricals as well, and be mined by Adani. The Gram Sabhas are rejecting these allocations as we did to the old mines- as they are taking all our forest lands.

There is so much violence carried out by mining companies towards communities and we reject them. For some years now, we have been carrying out koyla satyagrahas, in which we demand that these are our forest lands and therefore the ownership and rights to mine these lands, must be in our hands.

Testimony of a Grassroots Rights Advocate from Chatra District, Jharkhand 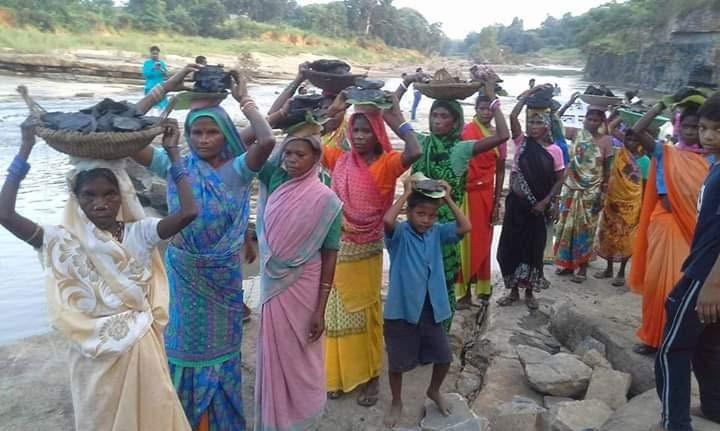 For me, the matter of coal mining blocks is very close to my heart as I live within a kilometre of the Gondalpura coal block and I know the effects of coal mining.

In the recent commercial coal block allocations, 9 coal blocks were allocated in Jharkhand- mainly in Latehar, Hazaribagh and Chatra district. In all of these districts, there has been very minimal legal recognition of forest rights.

I have been a part of the struggle against mining since 2005, and it has been a difficult struggle. A challenging time was after the shootings in 2015 at the Pakri Barwadih mine.  Despite demonstrating our clear opposition, in public hearings and other spaces, the companies get clearances from the centre.

While forest dwellers, Adivasis, farmers and workers have been raising our voices for generations, so long as those who are in power continue to work against the Constitution,  there is no change in our ground realities.

We are aware that commercial coal mining will mean more violations and there will be bigger mines and less interest in community consent.

Although it has been difficult to raise our opposition during lockdown, we have held Gram Sabhas to discuss these matters.

Various local level protests had  been planned on 30th June which is Hul Diwas, a day to commemorate the commencement of Adivasi struggle against the colonialists in 1855. In addition to this, various social groups and left parties in the state of Jharkhand, have also decided to launch a statewide campaign from 2nd of July against commercial mining.

Testimony of a Community Leader from Sambalpur District, Odisha

The proposed Talabira II and III blocks coal mining project belongs to the Neyveli Lignite Corporation (NLC) India. The Odisha state government submitted a proposal in May 2014 to obtain approval of the Union government for diversion of the 1038 hectares of forest land. This included 4.051 hectares under the safety zone within the leasehold area of 1914.063 hectares allocated for opencast coal project (OCP) in Jharsuguda and Sambalpur Forest Divisions. Stage II clearances for the project came through in March 2019. Locals said that the permission was given based on forged Gram Sabha resolutions.

In this area, our forefathers told us that there was no dense forest until 1850 when they started planting and continued to do so for 100 years. The people of our villages have been taking care of the forest with their traditional knowledge. For many years, our community collectively cared for the forests.  We had to pay 3 kgs. of rice to a forest guard to do so, and in this way we nurtured these forests.

And then, all of a sudden, in December 2019, guarded by heavy police and security forces, tree felling started in our forests without community consent. While official sources say that 15,000 trees were cut, we know that the reality was that 40,000 trees were destroyed.

Despite the Covid 19 lockdown in place, blasting work for the mines continues even during the lockdown. Villagers are restless about the situation. Even before the lockdown, their entry to forests had been restricted, and during the lockdown they faced more hardships and couldn’t even access the forests to collect forest produce.

Meanwhile, all the shops are located far away from the village and open only for limited hours, making access to food and supplies very difficult.  We demand that the crores of money that has been appropriated in the name of development, should be returned for the ‘actual development’ of the forest and our communities.

[ These stories are collected and compiled by an independent group of researchers and advocates for forest rights. They can be contacted at vanadhikarmedia@gmail.com Republished with their permission with minor edits]

The Triumph Of Sharmila Devi And Tamil Nadu’s Women Leaders

Thirumanvayal Panchayat, Sivagangai District (Tamil Nadu): Sharmila Devi (39), the youngest dalit sarpanch of Thirumanvayal panchayat in southern Tamil Nadu’s Sivagangai district, has pulled off what none of her upper-caste, male predecessors could in 50 years–bringing drinking water to the village.“Thirumanvayal had uppu thanni (salt water). The villagers had to go to the nearby villages to get their daily supply,” she said. “I have seen this since my childhood. I always wondered why we could never solve this problem.”The water crisis is also the reason why Sharmila, who had studied upto grade X, chose to contest for the panchayat president’s post in 2011