Jammu and Kashmir: Khalida Akhter (36), an ASHA worker from Sheeri village in Baramulla district in North Kashmir, died of Covid-19  in May this year.

An Accredited Social Health Activist (ASHA) , Akhter was one of the 12421 women led community health workforce in Kashmir, who serve as the crucial link between the community and the state’s public healthcare system, providing maternal and natal care, immunisation and other services. During the Covid-19 pandemic, ASHA workers have played an important role in responding to and containing the spread of the virus.

Everyday, Akhter would visit twenty to thirty of the three hundred households in the village– monitoring  the residents for Covid symptoms, persuading them to get tested and organising testing facilities– often without adequate protective gear or any other facilities. In a state with high levels of vaccine hesitancy, she had mobilised nearly 500 elderly residents of the village to get inoculated before she succumbed to the virus.

“She got infected while doing her duty. She was a very hard-working woman,” said her husband Ghulam Nabi.

Nabi, a daily wage worker, is now the sole carer for their two young children. Akhter was the parent who would buy clothes and books for their children, remembers Nabi.

Akhter’s family is entitled to receive an insurance payout of 50 lakh rupees under the Pradhan Mantri Garib Kalyan Package Insurance scheme announced by the Ministry of Health and Family Welfare  for frontline healthcare workers, who died on Covid-19 duty. The family has neither received the insurance money nor any other form of compensation from the state government. The government’s apathy towards Akther’s family is despite the fact that she was the leader of the ASHA worker’s union in her block.

ASHA workers are a million strong female community health workers, the largest in the world, who form the very edifice of India’s public health care delivery. Instituted under the National Health Mission in 2005, they have been instrumental in improving maternal and child health outcomes and reducing the communicable disease burden in India. During the Covid-19 pandemic, they have been doing the crucial work of tracing and testing people with Covid symptoms in their communities and providing the first response system. Additionally, they have also been providing psycho-social care and support to women in their communities.

Vulnerable to the virus

ASHA workers in Kashmir, like almost everywhere else in the country, have been working through the pandemic, without adequate health safeguards and protective gear, making them vulnerable to the virus.

Poosh Maal, a block president in Shopian district, developed severe pneumonia and other complications after she contracted the virus in June 2020. She had to be hospitalised in the chest disease hospital in Srinagar, 57kms away from her home.

Maal was infected after she spent weeks surveying the residents of Nadigam village in Shopian. She traced ten people who tested positive subsequently, three of whom died.

“I was doing a survey in the area with no masks and gloves,” she told BehanBox.

As her health deteriorated, she had to be put on oxygen support .

“I thought I might not survive. That’s how bad my condition was,” she said.

Maal’s hospitalisation put a severe strain on the family’s finances. They had to shell out Rs 65,000 for an oxygen concentrator after the hospital could not arrange for more. The family also had to pay Rs 45,000, as living expenses during their three week stay in Srinagar, during the course of her hospitalisation.

“I was lucky that I had resources and survived”, said Maal. Her family could withstand the financial stress as her husband had a stable government job in Srinagar.

“How can an ASHA worker who is poor survive this situation?”, she asks.

Recently, when Maal made a request for masks and gloves to the health department in Shopian, she was baffled by the reply she got:

“The health department asked the ASHA workers to wear Abaya(cloak) and cover their mouth with a scarf ,” she said.

In a 10 state study conducted by BehanBox between October and December 2020, we found that 28% of ASHA workers had not received any protective gear from the government during the course of the pandemic. Almost all ASHA and Anganwadi workers reported to have  received basic gear like masks, gloves and sanitisers only 2 or 3 times since the pandemic began.

In most states, except Andhra Pradesh, Kerala, Karnataka, Haryana, West Bengal, Sikkim and most recently in Maharashtra, ASHA workers do not get a fixed monthly salary. Categorised as volunteers under the  National Health Mission, they are paid a monthly honorarium of Rs 2000 per month conditional on performing 8 tasks,  revised  from Rs 1000 in 2019, along with task/activity based incentives for mandated 66 tasks. These incentives range from Rs one for every oral rehydration solution (ORS) packet distributed to Rs 300 for each institutional birth.

“We have not received our regular incentives for the last 6 months”, Rifat Ara (36), an ASHA worker from Chaari Shareef in Budgam district in Central Kashmir told BehanBox.

ASHA workers across India faced severe delays in the payments of their regular incentives, we found in our ten state research. Delayed payments are forcing ASHA workers across the country, who often come from poor and vulnerable households, into a spiral of debt.

“One of our Asha workers had to sell a chicken at home to manage money for bus fare,” Ara said. “That’s what most of ASHA’s struggle with”. Ara had to take  a loan of 10,000 rupees to pay for her children’s school fees and books. Her husband Feroz Ahmad is a daily wage worker.

In addition to their payments delayed by several months, ASHA workers in Kashmir have had their entire set of incentives withheld if they fail to complete all their assigned tasks for the month, said Ara.

ASHA workers are not entitled to any of the regular social security benefits– maternity leave, pension, provident fund or Employee State Insurance (ESI). Few ASHA workers reported that they have been asked to apply for health insurance for which  300 rupees would be deducted from their monthly incentives.

The outcome of the state’s failure to pay their full incentives regularly is a very personal one– a massive rise in domestic violence within their households.

“Our in-laws accuse us of hiding our money. When we tell them we are not being paid, they ask us to leave our job,” said Ara. Three of her ASHA colleagues have had to quit their jobs in the past year.

“ Working women are already despised in our society. My mother-in-law and community members too, accuse us of being ‘bad women’ because we roam around in villages for the surveys”, said an ASHA worker who wished to remain anonymous.

Zareena Bano (34), an ASHA worker  in Chaari Shareef in Budgam, regularly faces taunts from her husband because she has not received her incentives for the last eight months. She has not been able to pay her son’s school fee for the last 2 years, causing her a lot of anxiety.

“Today my son asked me to buy him a shirt which costs 600. If I don’t get him the shirt today, he will not let me enter the house,” she said.

ASHA workers we spoke with, also reported mistreatment from other health workers on duty.

“We stand in the scorching heat in the park while we wait for our patients in the hospital. We are treated very badly,” said Bano.

ASHA workers have been on the frontlines since the door to door vaccination drive began in Kashmir in March this year. They are a part of a team consisting of paramedics and female multipurpose health workers (FMPHW).

59% of Kashmir’s population above the age of 18 have received one dose of the covid vaccine according to the latest data from the  Cowin portal. Rural areas in Kashmir are reporting high levels of vaccine hesitancy, especially among women.

Masooda Akhter, an ASHA worker from Nagbal Yusmarg village, 48kms from Srinagar, has been busy in door to door vaccination drives.

Yusmarg has a large population of nomadic tribes with little awareness and high levels of  hesitancy. She has not been able to take  a single day off from work since the pandemic began last year.

“People often fight with us and don’t let us enter their houses. It takes a lot of effort to motivate the few who agree to get vaccinated” she said.

“Without ASHA workers, it would be  impossible  for the government to motivate people for vaccination”, said Maal, the ASHA leader from Shopian.

Vaccine hesitancy is a consequence, both of, the rampant misinformation as well as the lack of trust in the policies of the government of India among the Kashmiris.

“ While vaccine hesitancy is a global phenomena, it is compounded by the trust deficit and communication gap between government and people in Kashmir. People feel that the system is run by outsiders” said Dr Sheikh Showkat, a political analyst and a prominent scholar of human rights and international law based in Srinagar.

In fact, over 80% of healthcare workers in Kashmir have not taken the  Covid-19 vaccine,  claimed  the Srinagar based Doctors Association Kashmir (DAK).

Gender gap in vaccination is high in Kashmir. Only 40.7% of eligible women have received a single dose of vaccine.

Most women we talked to were unsure whether the vaccination was beneficial at all.

Fehmeeda Bano (55), a homemaker from Pulwama, is one of the 60% of eligible women in Kashmir who has not taken the vaccine yet. She does not trust the government policy on vaccination.

“I have even heard that the vaccination can cause death in two years,” Bano told BehanBox.

Naseema (27), who uses one name,  a teacher in a private school in Pulwama town, believes that the Covid vaccine would make her infertile.

“This is a drive towards population control in Kashmir,” she said.

Fear of infertility has emerged as the biggest reason for the high levels of vaccine hesitancy among women, according to Dr Shahnawaz Kaloo, a Kashmir based radiologist. Such fears have seen people in rural Kashmir argue with and attack health care workers who went to administer the vaccine.

“People shut the door to our faces.We have to deal with insults and shouting. Most people believe  that we are paid 20,000 to 30,000 rupees to convince them to get vaccinated,” said Poosh Maal.

Despite the efforts of doctors and frontline workers such as ASHAs to counter the misinformation, they still persist.

For years, ASHA workers across Kashmir and the rest of India have been demanding their rights. In recent months, they have gone on strikes in Kashmir, Maharashtra, Karnataka, Delhi and Madhya Pradesh demanding better pay and work conditions.

“Tell me, are we demanding more than what we deserve,” asked Maal. 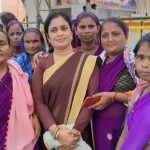 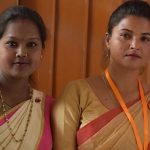 Hyderabad: Minara Begum, 33, has reached breaking point. “If the government of Assam does not… 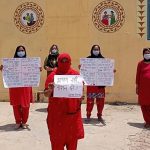 Anger, Distress Among India’s Frontline Workers In Fight Against Covid-19

Without them, It would be impossible to track, test and monitor Covid-19 patients across India’s…