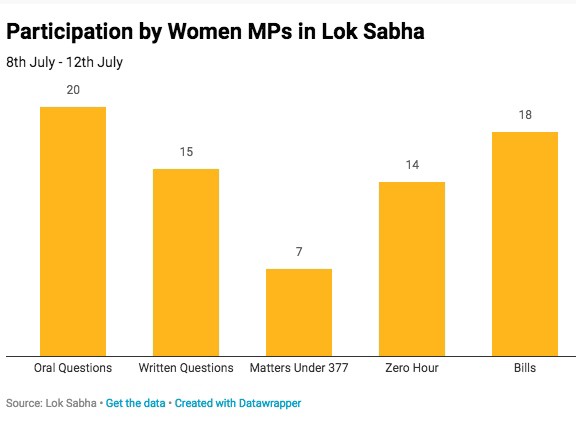 Asked 20% of all Oral Questions

7% of speakers during Matters Under 377

14% of speakers in Zero Hour

18% of speakers during debate on the Union Budget 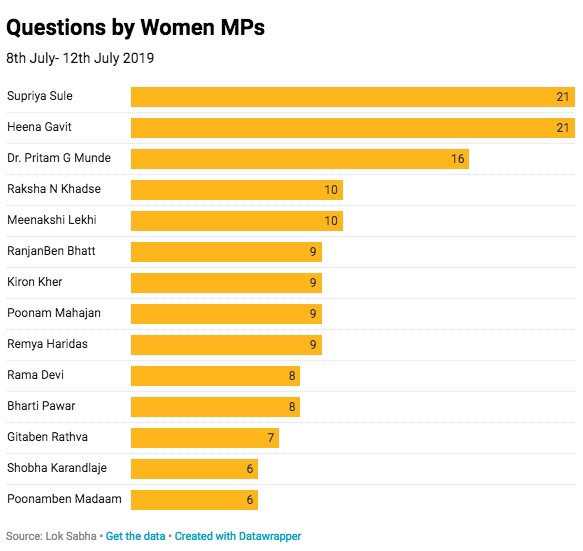 Most questions from Women MPs were directed at the Ministry of Health and Family Welfare (MoHFW), followed by Agriculture and Human Resource Development (HRD). 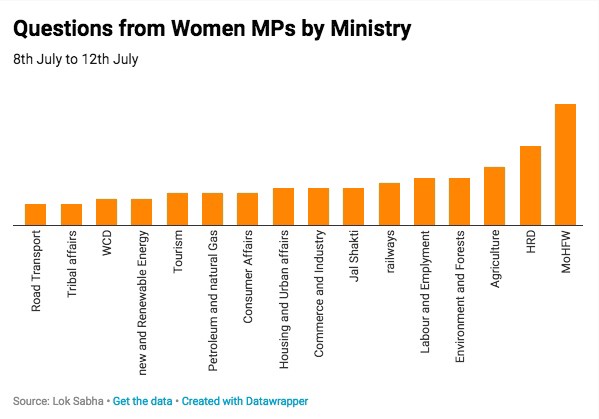 Some of the significant questions were:

Apaprupa Poddar (TMC) asked the Minister of Communications if the Government proposes to auction largest block of spectrum to ensure affordable 5G services in the country. She also asked whether TRAI has failed to achieve the target users in the auction of 3G and 4G spectrums and if past spectrum auction/ sale in the country was reportedly poor.

Poonamben Madaam (BJP) asked the Minister for Statistics and Program Implementation (MoSPI) if it agreed with the Central Statistics Office (CSO) data that India’s economic growth slowed to a five-year low of 5.8 % in fourth quarter of 2018–19, pushing the country behind China. She also asked if growth in the tertiary sector has been slower than the initially estimated growth figures.

Supriya Sule and Heena Gavit asked the minister of Law if Gram Nayayalayas have been established to provide speedy, effective and easy justice to the people and the data on funding and the number of such grassroots courts. They also sought answers on the purpose and objectives of the Nyaya Mitra Scheme and if Government has taken steps to provide free legal advice to the marginalised people.

The minister of Jal Shakti was asked a lot of questions by different women MPs on access to water this week.

V Geetha Vishwanath (YSRCP) aslo wanted to know if according to UNICEF and WHO reports, there has been absolutely no growth in the population with access to piped water facility between 2000 and 2017 and the corrective steps being taken.

Ranjanben Bhatt asked if the Union Government is considering to discuss the issue of water conservation with the State Governments.

The issue of the rights of street vendors and hawkers was raised by women MPs to the Minister of Housing and Urban Affairs.

Aparajita Sarangi (BJP) asked the minister if there is a ‘National Policy for Urban Street Vendors’ which is being implemented in the country and the status of its implementation and monitoring.

Supriya Sule and Dr. Heena Gavit (BJP) asked about the details of various slum rehabilitation schemes being implemented for slum dwellers and weaker sections in the country, the targets and achievements andfunds allocated. They asked if the Union Government proposes to give property rights to slum
dwellers.

Meenakshi Lekhi(BJP) asked for data on the funds released and utilised under the Integrated Housing and Slum Development Programme (IHSDP) during the last three years.

Pratima Mondal (TMC)asked about government efforts to mitigate the threats to the lives of slum dwellers in linear slum settlements along railway tracks.

The issue of declining Female Labour Force Participation came up once again in the lok Sabha this week. Ranjanben Bhatt BJP) asked the Government if is contemplating to propose a policy to promote women empowerment and their safety to increase their participation in the workforce

Remya Haridas(INC) asked the Minister of Information and Broadcasting on the details of expenditure incurred on advertisements by various Government Departments/Public Sector Undertakings during the last three years and the current year.

Supriya Sule and Dr. Heena Gavit sought answers on the vaccine production and if there was shortage of vaccines against the usual requirements under various health programmes including the Universal Immunisation Programme (UIP) and details of the gap. They also sought data on the quantum and types of vaccines imported and bought from private companies for various health programmes.

Discussion on Union Budget and Railway Demand on Grants

There was a discussion on the Union Budget presented last week. Of the 100 MPs that participated in the debate, 23 were women MPs.

On Thursday and Friday, MPs debated on the Railways Demand for Grants. 27% of the participants in the discussion were women.

How Women Farmers in Punjab Mobilised Against The Farm Laws

“These capitalists will ruin us,” thundered Charanjeet Kaur, a thirty nine year old farmer with a medium landholding of 12 acres (4 hectares) from Wara Bhaika village in Faridkot district of Punjab. “Instead of bridging the gap between the rich and poor, government is trying to get rid of the poor altogether,” she told BehanBox on a mid December morning at Tikri on the Delhi-Haryana border–one of the two sites of the groundswell of protests against the new farm laws legislated by the Government of India.Sat beside her, Manjeet Kaur (40), a small farmer with 2 acres (0.8 hectares) landholding